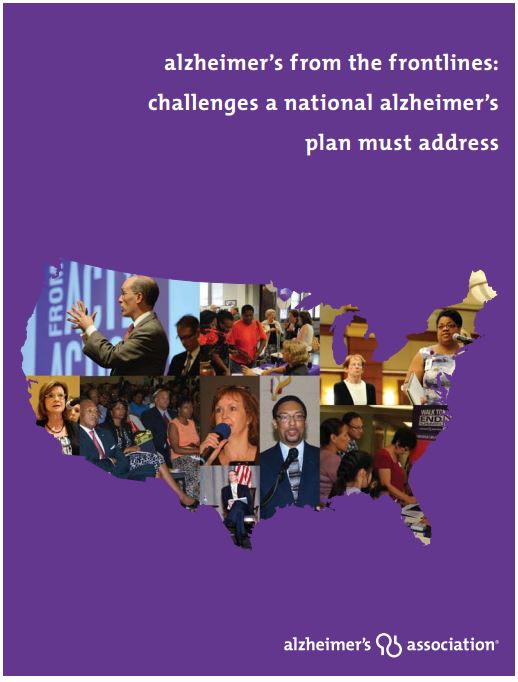 The Alzheimer’s Association invites you to a briefing on:

“Alzheimer’s from the Frontlines: Challenges a National Alzheimer’s Plan Must Address”

Building on the Association’s commitment to provide a platform for those directly affected by Alzheimer’s, the Association and its more than 70 chapters nationwide hosted over 130 input sessions throughout the country, allowing thousands of individuals to speak on behalf of all Americans counting on this effort to change the trajectory of this devastating disease for the millions affected today and the millions more at risk tomorrow. “Alzheimer’s from the Frontlines” provides a rare and unique window into the real, unrelenting challenges the disease forces on families year after year.

The Alzheimer’s Association is the world’s leading voluntary health organization in Alzheimer care, support and research. Our mission is to eliminate Alzheimer’s disease through the advancement of research; to provide and enhance care and support for all affected; and to reduce the risk of dementia through the promotion of brain health. Our vision is a world without Alzheimer’s. For more information, visit www.alz.org

A broad-based coalition of aging, disease, research, and patient groups supporting the mission of the National Institute on Aging (NIA).

© Copyright 2022 Friends of the National Institute on Aging